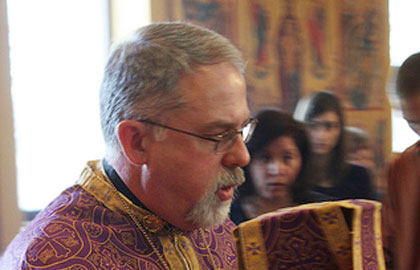 Fr. Thomas Gallaway became Pastor of St. Andrew Orthodox Church on August 1, 1988. He was ordained to the priesthood on August 1, 1982 and elevated to the dignity of Archpriest on March 17, 1996. Prior to coming to St. Andrew, Fr. Thomas served as pastor of St. Nicholas Orthodox Church in Beckley, West Virginia. Fr. Thomas holds a BA in history from Marshall University in Huntington, West Virginia (1977), and is a graduate of St. Vladimir’s Seminary in Crestwood, New York (1981). Among his teachers at St. Vladimir’s were its former deans Fr. Alexander Schmemann, Fr. John Meyendorff, and Fr. Thomas Hopko. Fr. Thomas is married to Jeanette (Dragelovich) Gallaway. Their three sons are Patrick, Michael and Timothy. 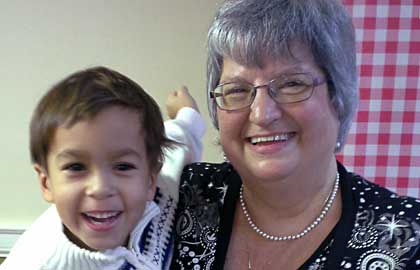 “Married priests are normative in Orthodox parishes…. the wife of a priest has a title. In Greek, she is called, “Presvytera” (the feminine form of “presbyter” or “elder”). In Russian she is called, “Matushka,” which is a diminutive of the word for mother….The fact that there is a title points to a role and an honor that surrounds the role. A priest’s wife is not ordained and does not carry out liturgical functions, but she is considered deeply important in a parish’s life.” – Excerpted from Fr. Stephen Freeman

Khouria Jeanette (Dragelevich) Gallaway is an identical twin, born to first generation American Serbian Orthodox Christians near Pittsburgh, PA (her grandparents immigrated from Serbia in 1915-1918). In her early years, she worked at the Eastern Diocesan Headquarters in the Serbian Orthodox Church, and later enrolled at St. Vladimir’s Seminary in Yonkers, NY where she received a Masters of Divinity in 1980. She went on to pursue nursing, and retired after 41 years as a Registered Nurse, working in medical-surgical nursing and a CardioThoracic Unit.
Kh. Jeanette married the now V. Rev. Thomas Gallaway in 1982, and they have three sons (Patrick, Michael and Timothy) and three grandchildren (William, Anna and Elli).
Kh. Jeanette has been Choir Director at St. Andrew for more than 20 years, and is currently Vice President of the local Antiochian Women, and President of the Midwest Antiochian Women. She is always a wonderful resource for newcomers to the church, and to the Orthodox faith. 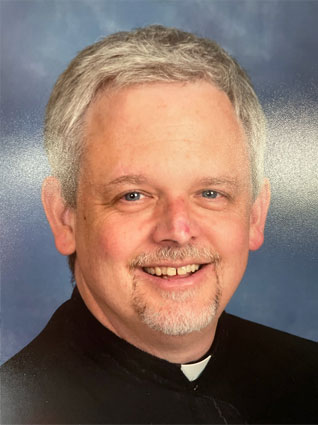 Deacon Andrew Leake was born and raised in Tupelo, MS and attended Mississippi State University. (He’s still a Bulldog fan but he’s ok with the Cats.) He moved to Atlanta, GA to attend a Methodist seminary. However, instead of entering the ministry in the Methodist church, he joined a Christian band called The Waiting. The band, which stayed together about 15 years, put out 4 albums and toured all around the country (He plays bass guitar).

Deacon Andrew became interested in Orthodoxy after some exposure to it from a church history class, and after a friend converted. He was Chrismated at St. Elias church in Atlanta, GA.

He attended St. Vladimir seminary and received a Masters in Theology in 2007, and married his wife shortly afterwards. They relocated to Madison IN, and then to Louisville, KY where Dcn, Andrew became a CPA, and served as deacon at St. Michael the Archangel parish in Louisville, KY. He and his family came to Lexington and joined St. Andrew in 2016. He and his wife have an 8 year old son. 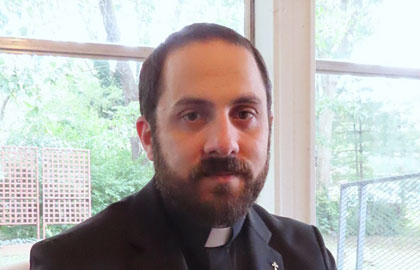 Deacon Damian Juarez-Luna was born in the city of Córdoba, Argentina.
He attended elementary and high school at an Orthodox school associated with St. George Orthodox Church of the Antiochian Archdiocese of Argentina, where he also went through catechism. During high school he felt a calling to serve the Church and he worked as a Sunday School teacher for several years.

After studying systems engineering at the university for three years, Dn. Damian (then known as Ulises) was offered a full-time position in his home parish as the priest’s secretary and one of the school administrators, where he worked while pursuing a course of study in industrial design with the goal attending seminary in Balamand, Lebanon after earning his college degree. During that time, Deacon Damian served as the church youth coordinator and collaborated with Metropolitan +SILUAN Muci on a number of projects. At the end of his studies, he met his future wife, who was from Kentucky, and the plan changed. Dn. Damian and Katherine got married in 2012 and settled in Bowling Green, KY in 2013. He served at Holy Apostles Orthodox Church, first as an altar server and then as a subdeacon. He worked with Fr. Michael Nasser and Fr. Jason Blais, and while serving the church in Bowling Green, he pursued orthodox biblical studies (CBB) and also received a certificate in Orthodox Theology (SOFIA) from the St. John of Damascus Institute of Theology of the University of Balamand in Lebanon. For several years, he was self-employed as a furniture craftsman and built Orthodox Iconostasis, bishop’s thrones, and other liturgical items for Orthodox churches.

Dn. Damian was ordained to the Holy Diaconate in September 2019 by His Grace Bishop +ANTHONY Michaels.

At the end of 2020, Dn. Damian and his wife relocated to Lexington, KY for new employment opportunities. Dn. Damian currently works as a CAD designer for a company in Lexington. He enjoys singing, playing guitar, and building things with his hands. Aside from the Church, his primary passion and hobby is woodworking.

Dn. Damian and Katherine are grateful to be part of the community of St. Andrew and for the warm reception of Rev. Fr. Archpriest Thomas and the Khouria Jeanette.

A Brief History of Our Church

In 1978,as part of its convention theme of that year, the Antiochian Archdiocese of North America published a list of six cities with mission potential. Lexington, Kentucky was on that list, and two years later, six local families with Orthodox backgrounds accepted the challenge and formed St. Andrew Mission Parish. The six families–Farha, Krieger, Lengal, Mann, Metry and Skaff–began with little more than a strong commitment to Orthodoxy. These pioneering families celebrated the first Liturgies in their homes, and occasionally in rented rooms, with the generous support of visiting priests from St. George Church in Charleston, West Virginia; Holy Spirit Church in Huntington, West Virginia; and St. Michael the Archangel Church in Louisville, Kentucky.

In April 1981, the tiny mission was assigned its first pastor, Father George York. The Episcopal Seminary on Sayre Avenue allowed the mission to use a small chapel on its Lexington campus. During this time, the community began to attract many local Orthodox families and a steady stream of converts. In 1984 it became necessary to leave the Seminary location, and a new pastor, Father Barnabas Van Alstine, was assigned to the Parish. Then began a period of wandering from one facility to another. For a time St. Andrew Mission rented hotel space for liturgies. Then it became a “storefront church” in a shopping center. Eventually, the congregation settled in a building that had once been a dance studio and was owned by a parishioner, who generously allowed its use. By 1985, the Lexington faithful had raised sufficient funds to purchase land in southwest Lexington.

In the spring of 1987, Father Basil Essey was assigned as Interim Pastor. Under his guidance, the Parish broke ground and planted the Cross on the Higbee Mill Road property. In the summer of 1987, Father Denis Lajoie was assigned to St. Andrew Orthodox Church. By winter 1987, the Parish erected a two-story structure on the two-and-half acre plot and the parish began meeting in the Church Hall on the ground floor. In December of 1987, His Grace, Bishop Antoun presided over the dedication blessing of the new facility.

In August of 1988, Father Thomas Gallaway was assigned as pastor of St. Andrew’s. Father Thomas has overseen the completion and beautification of the church interior. The twelve-foot iconostasis made of solid mahogany was completed in 1993 and icons, hand painted in egg-tempera by the famous Russian iconographer, Xenia Pokrovsky, were fully installed by the Feast of Nativity that same year. On the Feast of Pentecost, 1995, former pastor of St. Andrew Church, now His Grace, Bishop Basil Essey, returned to St. Andrew Orthodox Church to consecrate the completed church and to ordain Benjamin Mann to the Holy Deaconate. On March 17, 1996, His Grace Bishop Demitri elevated Fr. Thomas to the dignity of Archpriest.. St. Andrew Orthodox Church completely retired its mortgage in the early 2000s, and is now pursuing plans for expansion to accommodate a rapidly growing congregation.

The Parish Council represents the Church in the administration of its properties and affairs and is responsible for the receipt and disbursement of all general and special funds. Council members generally meet once a month to attend to these affairs, and each member is given a scope of responsibility that aligns with their talents or skills.

Council members for the 2021 session